So you’re all ready to launch a bunch of tweets to promote your newest piece of content. You’ve got a great headline, an awesome image, and a shortened URL. And now… the hashtags.

But which hashtags? How many hashtags? Do you really even have to use hashtags? Let’s take a look at the basics of hashtags and discuss best practices for using them wisely.

Why picking the right hashtag is so important

You want to use at least one hashtag in every tweet because it will increase the likelihood of that tweet getting liked and shared. It will, in social media lingo, increase “the reach” of your tweet. This has been proven by a bunch of studies.

Here’s the first study to consider: Stone Temple Consulting did some excellent research on the impact of hashtags, links, and images on tweet performance. Plus, Twitter’s own tweet study backs this up. According to Twitter, “Tweets with hashtags (the # symbol, immediately followed by the subject or keyword related to the Tweet) can increase engagement almost 100% (2x) for individuals and 50% (1.5x) for brands.”

The undeniable conclusion? Use hashtags!

Which hashtags should you use?

So we’ve established that hashtags are definitely worth using. Now, which hashtags to use? There are several great tools for picking hashtags. I’ll show you how to use each one by finding some hashtags for an actual tweet.

Let’s say we’ve got a post titled “Content Marketing Ideas for Musicians.” We need some hashtags for it. But we’re going to add only two hashtags, because Twitter recommends that as a best practice. Any more than that and your tweet starts to become unreadable.

So let’s pick hashtag #1. At first blush, it might be a good idea to use a hashtag with the largest possible audience. That would probably be #music.

But there are two problems with this. The first is that “music” is only tangentially related to our tweet and to our post. We’ve come across what is probably the first golden rule of adding hashtags: They’ve got to be relevant. Don’t add irrelevant hashtags to your tweets. That would be the Twitter version of link bait.

The second problem with that hashtag is that #music is a heavily used hashtag. In fact, the first tool we’ll use, RiteTag, marks #music as being overused.

A few words about RiteTag. I think it is the best tool available for picking hashtags. That’s why we’re starting with it. What makes Ritetag so helpful is that it grades and then color-codes hashtags for you. You can tell at a glance whether a keyword is good to use or not. The other thing that makes RiteTag so helpful is that it can be used via the tool’s website or directly in your browser as an app or plugin. It works with Firefox, Chrome, or Safari. RiteTag also works directly in the interfaces of Twitter, Buffer, Hootsuite, Tweetdeck, SocialOomph and SproutSocial. And it’s free.

This is what I would see after I have RiteTag installed on my browser and I’ve just searched Twitter for #music: But RiteTag has #music highlighted in red, which means it’s overused. So we need to think of something else. “Content marketing” is the first phrase in this post, so let’s try that.

According to RiteTag, #contentmarketing is a great hashtag. That’s a hashtag with a nice broad audience, though it is still 100% relevant to our post.

For the second hashtag, let’s find something more specific. As you can see in the screenshot above, RiteTag gives us some related hashtags. But there’s another tool you should know about that will give you related keywords in a more interesting view.

Hashtagify.me is my favorite tool for picking related hashtags, mostly because I love the interface. It is free, though there is a paid version with more features. And, as you can tell, I can even embed the whole graph on any website. Cool! Another excellent tool for seeing related keywords is Keyhole. You have to dig a little deeper to see the related hashtags, but they’re shown as a tag cloud, which many people prefer.

If you want to do more in-depth research on hashtags, Keyhole is a really nice tool. It tracks hashtag use on Twitter, Instagram, and Facebook. It will give you a beautiful, visual representation of several data points:

You can also save hashtags to your account and track their changes over time. Keyhole is free, but if you want more features, there’s a paid version available, too. That’s all well and good, but let’s get back to that second hashtag. How could we use these two tools to find the perfect hashtag for this tweet? Here’s the post title again: “Content Marketing Ideas for Musicians.” We’ve got the #contentmarketing part. Let’s capture the attention of the musicians. They’re our target audience. It’s always good to use at least one hashtag to attract the attention of your ideal reader. #Musicpromotion actually looks pretty good. Note that there’s also #musicmarketing. That might be even better. What does Keyhole give back for #musicpromotion? That’s a ton of data. If you look down at the tag cloud in the bottom left, though, you’ll see #musicmarketing mentioned again as a related hashtag. At this point, I think it’s either #musicpromotion or #musicmarketing for the second hashtag.

Here’s what RiteTag thinks of #musicpromotion:

And what it thinks of #musicmarketing: There are far more tweets per hour for #musicpromotion (21 per hour compared to four per hour). But there are more potential hashtag views with #musicmarketing (4,512 versus 3,996). Despite that count, it’s always a good idea to remember that tools give estimates. Don’t take the information they give you as the final word. These two hashtags have similar potential audiences, but one of them appears to get more activity than the other.

Let’s see what Hashtagify.me’s comparison tool has to say about these two. I’ll go to the table view, then check both hashtags, then click “compare”:

This is what it gives me: It looks like these two hashtags have been performing about the same, with #musicmarketing leading a bit. I think it may be a toss-up on which hashtag is better or worse.

But there’s one last tool to try: Topsy. Topsy also has a very nice hashtag comparison feature, and it’s free, too. Here’s what Topsy has to share about #musicmarketing vs. #musicpromotion: 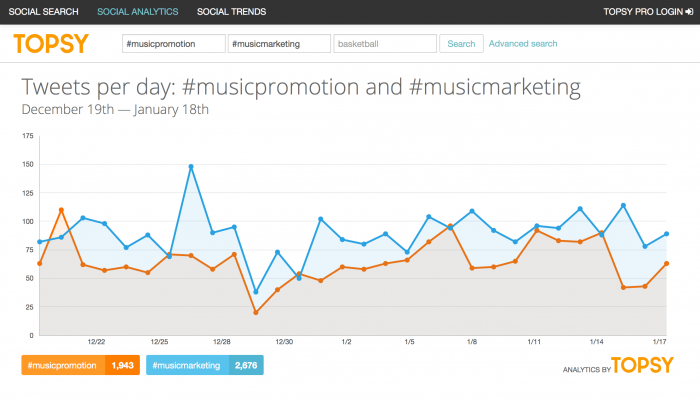 In this view, #musicmarketing (in blue) is getting more tweets. That’s interesting, because RiteTag suggested #musicpromotion was getting the most tweets. That’s why I suggested earlier that you should take what these tools tell you with a grain of salt. They’re all excellent tools, but they’re not perfect. Social media is an inexact science.

So which hashtag to use? Well, after all this research, I might actually toss #contentmarketing for this tweet. I might just use #musicmarketing and #musicpromotion. What would you do?

There is one more essential hashtag-picking tool to know about. It’s Trendsmap, and it’s especially useful if you’re a local business.. If you want to see hashtag activity for a specific area, this is the ticket. So that’s how to choose hashtags. You could keep things simple and just install RiteTag for most of your hashtag work. Then pull up Topsy or Hashtify.me for the times when you aren’t sure which hashtag to use.

Most of us have maybe a minute or less to pick hashtags for each of our tweets, so it’s good to have a basic system you follow all the time. Then maybe look back once a month or so and see if there are opportunities for better hashtag use. Do you have a system for picking hashtags? Would you have dropped #contentmarketing from my example tweet? Let us know about it in the comments.

What else can you do to get your tweets seen on social media? Read this eBook, 10 Things Marketers Should be Doing on Twitter, to get tips and best practices.