Images are powerful tools. They can attract and hold attention, or capture and convey an emotion in a way words cannot. Add some movement to your images and they become downright irresistible.

Video is still a powerhouse, but the humble animated gif is enjoying a rise in popularity, too. It’s always been a fun way to get a little extra attention. Unfortunately, animated gifs have also been used for too many corny banner ads and annoying animated emoticons. That’s sullied their reputation a bit.

But now more and more platforms support animated gifs. And more and more marketers are using them to make their content stand out. It’s making for some elegant visual marketing.

So what’s an animated gif?

Good question. Let’s skip the words and jump to the real thing.

This is an animated gif:

This gif first appeared on Reddit as an announcement about a company anniversary that no one noticed.

This is also an animated gif:

This comes from an email announcement sent by online retailer Evans. It was also included in Alchemy Worx’s recent roundup of noteworthy animated gifs in emails.

These two animated gifs help us define the format with a show-don’t tell meta-message. But to go further:

What animated gifs are not

As I’m sure you know, animated gifs aren’t the last word in moving images online. There are several very similar formats and ways to make images move that you should know about, and there are a few caveats.

1. Animated gifs are not videos.

While an animated gif could be bent into something like a video, it would either require a lot of frames in the animated gif, or we’d have to accept a new definition of a video (as a series of, say, five frames). Videos use a different file format than gifs, too. Videos typically come as AVI, MPEG, MOV and other video-specific formats.

2. Animated gifs are not cinemagraphs.

Cinemagraphs are hybrids of photos and videos. They have a lot of similarities to animated gifs:

But they aren’t animated gifs. This is a cinemagraph:

There’s an interesting post on the Convince and Convert blog about how different brands are using cinemagraphs in their marketing. AdWeek also published a post about Facebook’s plans for cinemagraphs.

Just understand that cinemagraphs are considerably harder to make than animated gifs. Someone with basic image editing skills can make an animated gif. It takes the skills of an artist to make a cinemagraph sing.

3. Animated gifs are not CSS animations.

CSS animations are another cutting-edge visual content technique, but they work thanks to coding, not thanks to a particular type of image file. CSS animations are well-suited to presenting data. So if you wanted to spiff up a graph or make a pie chart wheel around, a CSS animation might work. Alas, though, they don’t work on every browser, and they can be buggy.

Creative Bloq has a very cool post with some stunning CSS animation examples.

4. Animated gifs are not Flash.

Flash is kinda old-school. It has its applications, but it’s best to avoid Flash due to rendering issues (iOS devices can’t play Flash) and because Flash content is a black box for search engines.

5. Animated gifs are not Hyperlapse videos, either.

Instagram has figured out how to let us make time-lapse videos with smartphones. The technology is called Hyperlapse. You can get the Hyperlapse app for iOS devices here. The developers were also able to fix the bounce effect (they call the fix “Cinema Stabilization”) which would have made most Hyperlapse videos far less watchable.

Hyperlapse videos can be embedded on webpages, but they are still mostly creatures of Instagram.

How to make an animated gif

There are two ways to make animated gifs. The first is from images. The second is from videos.

Here’s how to make a gif from static images.

One thing it doesn’t do is let you add a caption to your gifs. If you want to do that, try either MakeaGIF or IMGFlip.

2) Upload the images you want in your gif. These can be huge images, or reduced to the size you want the final animated gif to be. I tried actually it both ways – in the first set the images were uploaded as 300dpi images several thousand pixels wide. Then I did another set with images I reduced in Photoshop down to 500 pixels wide at 144 dpi. The animated gif from the huge images actually came in 10% smaller than the one I made from the reduced images. Go figure. You can set the gif to play only a few times, or to infinite loop. I let mine loop. And while you can add audio, I’m not a big fan of audio on content unless it’s expected (like for webinars, podcasts, and videos).

When all those settings are selected, just click the “Create GIF Animation”.

You’ll see something like this next. The animation will be playing… the image below is just a screenshot.

While gifmaker.me does create fairly small file sizes, you can trim your animated gifs down more. This becomes especially critical if you’re making an animated gif for an email message.

You don’t want to use an animated gif that’s bigger than 80 kb in an email. Generally we recommend images to be small for email messages, but you may have to bend the rules for animated gifs. To do that, you can try using fewer frames, or making the final animated gif smaller in visible size.

Or you can use a file size reducer.

Here’s the file size reducer I used, EZGif. I was able to shrink a 236K image down to 113KB, without even using the highest compression setting.

How to make animated gifs from YouTube and other videos

The next way to make animated gifs is to use YouTube videos. There’s one way to do this that’s brain-dead simple.

Just go to the URL of the video you want to make into an animated gif. 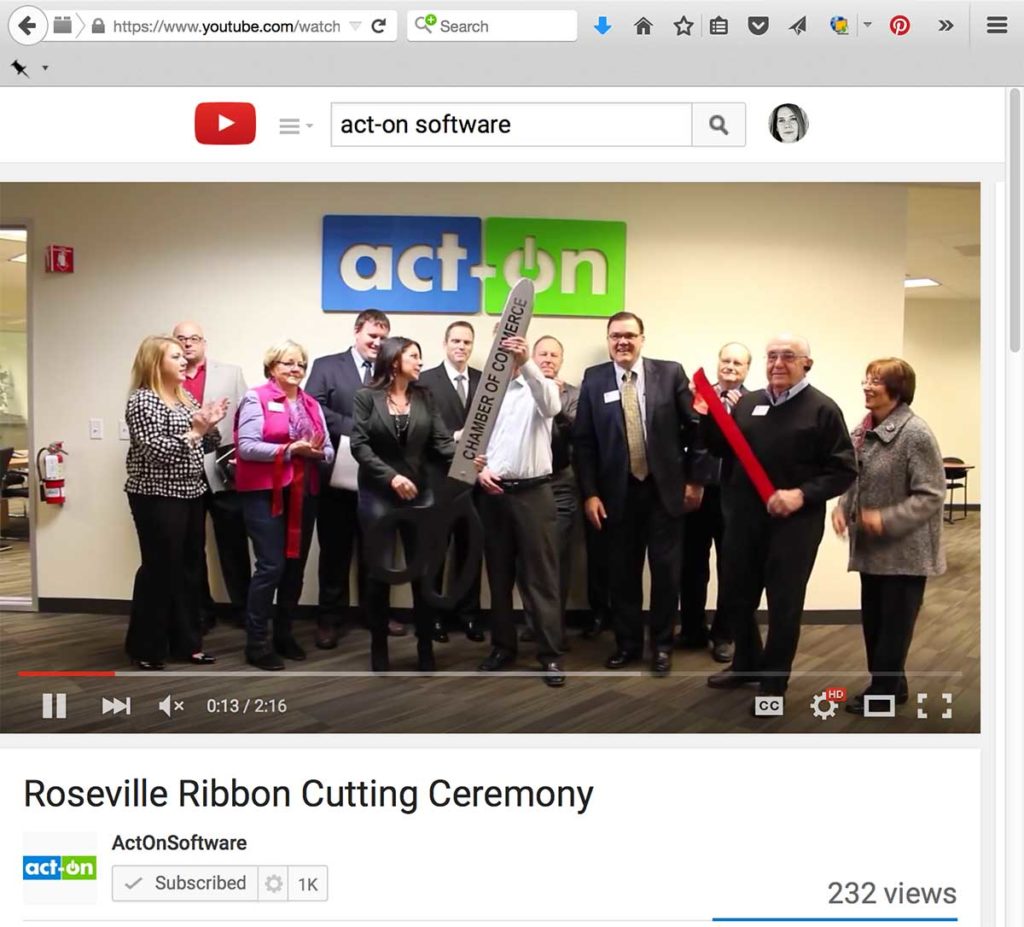 Type in “gif” in front of “youtube.com”, like this: Hit return. You’ll be redirected to a site that lets you specify some settings for your animated gif. And then choose how you want to share your animated gif.

There is a snag with this, though. This site is set up to host the image for you – it makes downloading the gif a hassle. That could be a good thing or a bad thing, but I’d rather host images on my site.

There are many other sites that let you make animated gifs from YouTube videos. MakeAGif.com and IMGFlip.com are both free and easy to use.

If you can’t make them, find them

No time to make an animated gif? That doesn’t mean you can’t use a pre-made one. There are several sites for free-use animated gifs:

Be nice and give credit to where you got the gif.

How to use animated gifs in your marketing

Ah, finally. We’re at the results part. Here are all the cool ways you can use animated gifs in your marketing:

Try to keep file sizes small, but animated gifs work great in emails. There are several reports of animated gifs lifting response, like:

Intouch Solutions also has a nice post about three other case studies of animated gifs in emails.

Caveat: Always design the first frame of your gif so it can stand on its own as a static image, in case your subscriber opens the email in a client (such as Outlook and Windows Phone 7) that don’t support animated GIFs.

Twitter and Tumblr have supported animated gifs for awhile. But Facebook recently announced their newsfeed supports animated gifs, too. They’ll even be allowing them in ads.

You don’t have to be BuzzFeed or Upworthy to use animated gifs in your posts. Social Fresh and Quick Sprout crunched some data for us. They found animated gifs are the most likely type of image to get shared from blog posts. Ebooks, whitepapers and research studies tend to hold a lot of information. And they should. But all that information is a problem on a download page, where you need to distill your message and the elements on the page.

Enter the animated gif. Why couldn’t an image of a static eBook be replaced with rotating images of the charts and quotes from the download?

Animated gifs are a great way to show people how to do things with software. Just keep them short and simple. When SEMRush wanted to announce a new feature, they sent an email with this animated gif:

And, here’s a throwback for those of you who were hanging around the Internet in the late nineties. One of the very first viral Gifs, the vaguely creepy Dancing Baby.

Animated gifs are the simplest way to add some movement to a page, an email, or a social media update. And while they may have associations with being a little amateurish, there’s no reason you can’t pick attractive, on-brand images that tell a compelling story your audience will appreciate.

With more and more platforms and services supporting them, animated gifs might be the best way to build some confidence with moving images… at least until you’re ready to dive into video.

Are you using any animated gifs in your marketing? Do you have any case studies to share with us? Tell us about them in the comments.

Are you ready to start adding some movement to your emails so they stand out from the crowd? Learn the how to start using GIFs, cinemagraphs, videos and more in our free eBook – Email Idea Lab.