Complimentary guided product tours, talk to our experts, learn how we can help you.

As business people and marketers, we traffic in data. It’s what we use to make decisions (even gut decisions). Data is also how we communicate the status of things and how we make the case for change.

As logical, results-oriented business folk, we like to be data-based.

This principle is so prevalent now that it shows up in a number of disciplines. There’s data-driven marketing. Data storytelling. It all ties nicely into the trend of visual content, too.

Yup – all our charts and graphs are a type of visual content. We even have a nice word to blend data and visual content: “data visualization,” aka, “data viz.”

Given how powerful and ubiquitous data visualization is, wouldn’t you like to be better at it? Want to pick up a couple of tips on how to make a pie chart or graph more convincing?

If so, keep reading. These proven best practices will help. To keep things short, I’ve limited my suggestions to the two most commonly used data viz devices: pie charts and bar graphs.

Didn’t know they were troublemakers, right? But quite a few data visualization experts are intensely opposed to pie charts. Walter Hickey opens his blog post, “The Worst Chart In The World” with this sentence: “The pie chart is easily the worst way to convey information ever developed in the history of data visualization.”

Even Edward Tufte, possibly the most respected voice in data viz, says “pie charts are bad and the only thing worse than one pie chart is lots of them.”

So why are they so awful?

Basically, it’s because they’re hard to read. They’re hard to read because our brains aren’t great at interpreting the relevant size of different slices of the pie. If the sections of the chart are similar, we can’t easily tell which piece is bigger.

If you’ve got only two or three slices of the pie, and all those slices are very different, then you don’t have much of a problem. But that’s not the case with most pie charts. All too often, we try to squeeze too much data into them – not only do we end up with lots of slices, we get too many similarly sized slices. That’s when it becomes hard to tell the difference between, say, a slice that’s 23% of the pie versus a slice that’s 28%.

So, is this really such a big deal? Are pie charts really warping our perception so badly?

Now compare those pie charts to these bar graphs. They show the same information, but the bar graphs let us see much more precisely both the changes and how big the different categories

Yeah… so pie charts have issues. But I’m guessing you’re still going to have to use them from time to time, whether it’s because your boss said so, or because it’s difficult to depict your information any other way.

So, if you must use a pie chart, try to abide by these rules:

1. Don’t use more than five sections.

Too many skinny slices are hard to read. They cloud the information as much as they reveal it. 2. Place the largest slices from “12” at the top (like on a clock) and work your way around the circle.

3. Avoid comparing one pie chart to another.

Remember that example above, with the three pie charts showing changes over time? That’s not a good time to use pie charts. Because even one pie is hard to read, lining up a row of them for people to compare makes things even worse. If you want to compare two sets of data like that, use a stacked bar chart like this: They make some slices of the pie seem larger than others. This makes the chart even harder to read, and possibly downright deceptive.

In the example above, the purple slice looks larger than the dark blue slice in the back, but maybe they’re the same size, due to the foreshortening of the blue slice. The angles are hard to measure, too.

I don’t advise this (of course), but if you wanted to manipulate information – to deliberately make that dark blue slice look smaller than the purple slice ‒ a 3D chart could do that well.

When to Use a Pie Chart

Before you swear off pie charts forever, know this: There is an exception to the no-pie chart rule. Really. The data viz experts say so. When you’ve got 2-3 data points that are significantly different, then it’s fine. You can have your pie at that time. This is the one instance when pie charts are helpful ‒ they’re good at showing people what a fraction of something looks like.

For example, this is a reasonable use of a pie chart:

How to Calculate Customer Value and Cost Metrics

After pie charts, the next most common chart we see in business is the bar graph. These are not as reviled as the poor pie chart, but they’re associated with some frequently made mistakes. Here are the worst offenders:

Fortunately, this is an easy fix. Just switch the information on the axis so the long labels can be read horizontally. 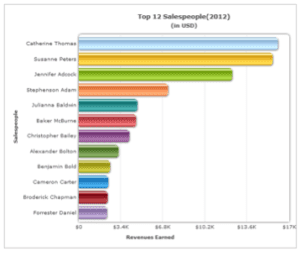 The charts right above don’t break this rule. In both the vertical and horizontal examples, the bars that are longest are up top, and they descend orderly to the shortest bar.

This lends a sense of visual consistency, but more importantly, it makes it much easier to understand how the measurements compare.

It makes the viewer have to guess or squint to see how often the different excuses are made.

Of course, if you’re using a bar graph to show changes over time, then you should prioritize the time increments and put them in order, rather than forcing the bar lengths to line up.

3. Avoid shadows or 3D elements on your graph.

It just distracts from the information. Keep the imagery of any data visualization as simple as humanly possible. You want the star of your information to be the information itself – not anything else.

This is a small mistake, but it makes every data viz experts’ list of no-nos. Those lines behind the bars on a bar graph? They should go. They’re only cluttering up your graph.

The clearer we can communicate our message, the more likely we are to be heard. Pie charts and line graphs can do that ‒ but only in specific circumstances, and only if they’re depicted in a straightforward and clean way. These charts distill a lot of information, but the simpler they appear, the more impactful they become.

How to Calculate Customer Value and Cost Metrics

Go Beyond the Lead

Watch this 2-minute video to see Act-On in action

Learn how our growth marketing platform can transform your marketing.

Delivered Straight To Your Inbox